This summer, while cruising a craft show, a beautiful faux stained glass angel wing caught my eye. The artist used 3-D paint on a sheet of clear glass and it was super pretty, but I didn’t get it because the snob in me wanted the real deal. It was then that I decided that I wanted to learn stained glass. I watched a ton of YouTube videos, bought some equipment, and FAILED on the first step of cutting the glass.

When I was a child, I cut my hand pretty bad when I fell while I was running with a crystal goblet filled with chocolate chips (another story). Ever since then I’ve been afraid of breaking glass. That first score I made in the glass was not a good score. It broke all wonky and although I put it down that day, I enrolled in a class and have been slowly learning this summer.

This was my first piece: A cross. I figured, how could I go wrong with a cross? Well, I broke the glass all funky the first time I cut it, then I found out the hard way that my brand new iron hadn’t been tinned, so it charred the lead and burned right through the copper foil. I had to bridge it and all kinds of stuff. But, I think it turned out perfectly imperfect for a first try and it has a special place on my mantle!

After cutting and foiling 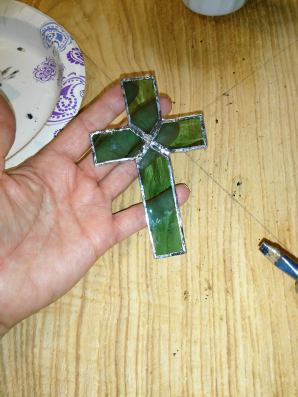 Finished – all patched up – with the guilty untinned solder-tip in the pic!

After my first class, I sketched out a heart with wings template that I really wanted to make for my MoM. I didn’t want to use anyone else’s design, and heck, what’s a BFA for if you can’t draw something simple? This was my second attempt at cutting and first attempt at cutting curves. Let’s just say I broke a couple of hearts before I figured out how to cut those! 😀

After cutting and foiling, but I ended up lowering the wings

Since I finally figured out how to cut wings, I took a stab at an angel wing. It’s OK, but I need to go back to the drawing board and refine the shapes. 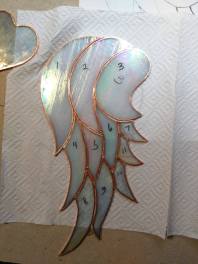 Next, some fun for my niece – a cupcake and a mermaid admiring a REAL fossil shark tooth (of course!), plus a few projects for friends!

A smaller, simplified heart with wings 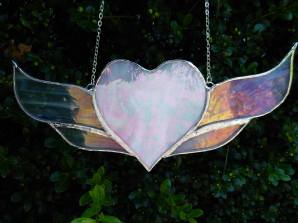 A smaller, simplified heart with wings