This tooth was found by Nathan Rickman at one of the Cretaceous sites that I like to visit. The tooth is over 1.75″ long, which is larger than any other mosasaur tooth that I have seen from that site. Amazing find, and one that I couldn’t help sharing! Thank you, Nathan, for allowing me to share your pics! 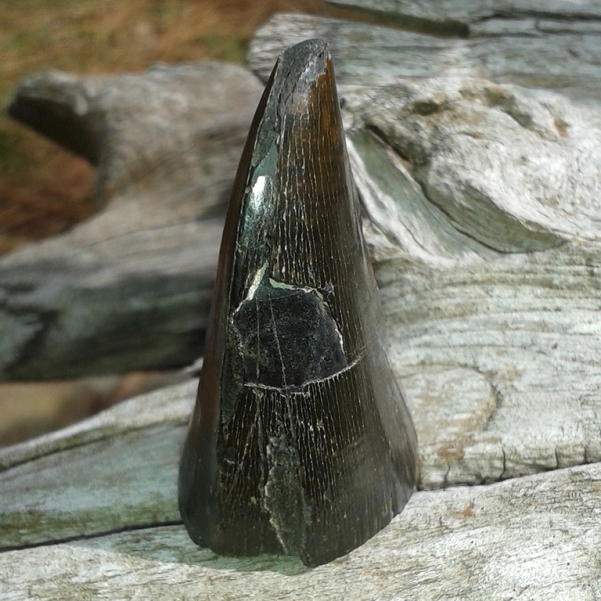 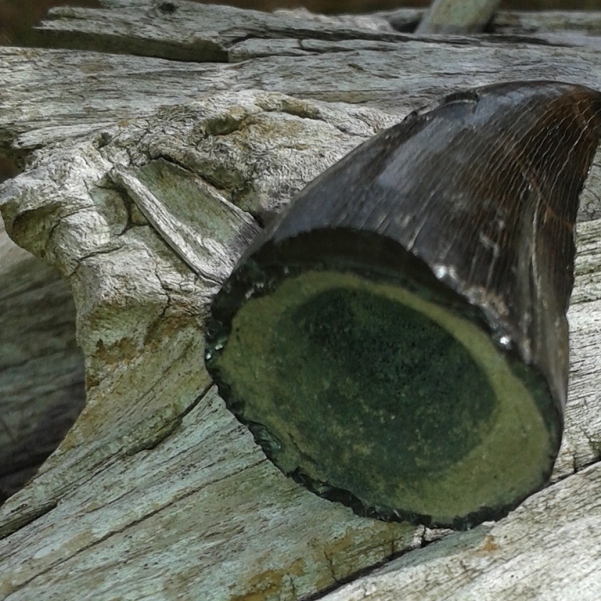 I’ve been taking photos of my Cretaceous Mississippi fossils and am having a droolfest over my favorite of them all.. my Globidens alabamaensis Mosasaur tooth! It deserves its own page. Look at the rippled enamel. It is a work of art to me! 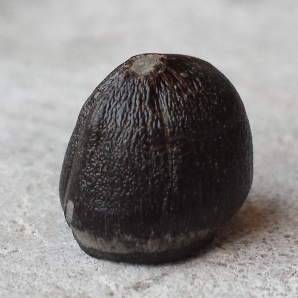 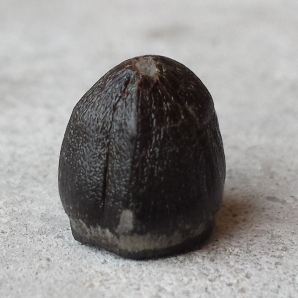 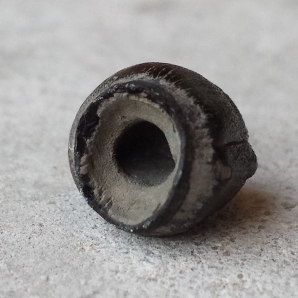 I will never forget the day I found it. April 22nd, 2016. My MoM and I took two days to spend at the site. When we got there, the water was muddy and high and a local was standing there shaking his head saying this was not the day to collect. We saw two snakes there two weeks before and as fearful as I am, I couldn’t sleep for the thought of them everywhere 🙂 We asked him about snakes and he said a woman got bitten by a water moccasin there the year before. He said he has seen mostly water snakes, but has also seen water moccasins and copperheads there, so he did absolutely nothing to squash my fears. We decided to go in anyway… it was my shark tooth “crack” addiction pushing me in. I brought snake gaiters to wear and the water ripped one right off my leg. Just a few minutes later I also lost my good sieve (which I thankfully found the next day). I was so upset that I took my MoM all the way down there and it was sure to be a bust (and that I “littered” on Earth Day, no less). She asked me if I wanted to go back to the hotel, and I suggested one more place to try first. We found a few shark teeth, and then, out of the muddy water, this beautiful Globidens rolls to the side of my sieve. I nearly lost it! As pretty as it is in these photos, it was glistening.. almost iridescent in the sun. It’s all I could think about the rest of the day. I was just thanking God that He gave me something so special and that he kept us safe from the snakes and high water.

I found a new tooth on our last trip! On this trip, I thought I had found a bunch of mosasaur or crocodile tooth fragments, but one of them was a swordfish tooth from this cool guy (or gal), Protosphyraena.

This week I found that I have another similar tooth, that is also likely Protosphyraena! This is not a common tooth from the site, so it is pretty exciting to add this to my collection! They are striated, missing the root, and a more flattened than the mosasaur, croc, and other bony fish teeth I’ve found there. 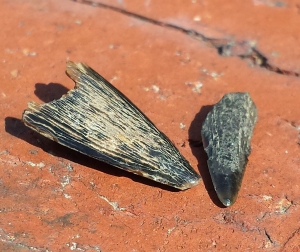